Subscribe to our mailing list to receive news releases and other materials related to Provenance Gold Corp. Your email will never be shared or sold and you can opt out at any time.

November 30, 2022 - Provenance Gold Corp. (CSE: PAU) (OTCQB: PVGDF) (the “Company” or “Provenance”) is pleased to announce it has recently completed rock chip sampling and other field work at its Eldorado property in Eastern Oregon. Sampling focused on areas that had exposures of available rock for sampling in areas of significant soil cover. In addition, the Company is also in the process of reviewing, compiling and evaluating all previous historic sampling programs at Eldorado including soil sampling, rock chip sampling, trench sampling and drill hole sampling.

The Eldorado area has been the focus of considerable historic placer mining and modern era exploration by at least five mining companies. All this activity is extensive, and evidence of both placer mining and drilling / trenching remains in every corner of the property. The attached Figure below shows a seamed 1998 aerial photograph over recent satellite imagery which validates the considerable work that has been done to date on the property. 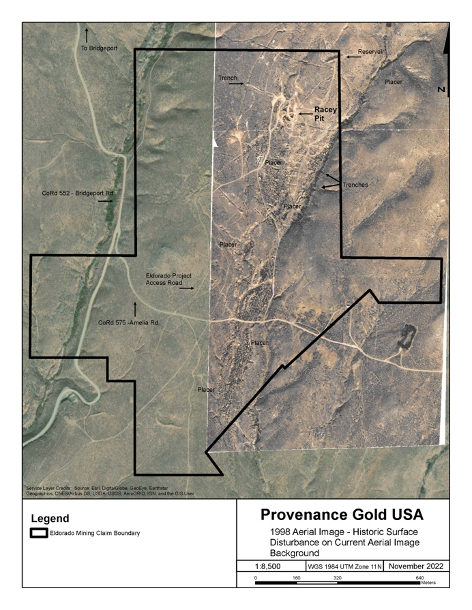 The Company’s current field work has focused on collecting 38 rock outcrop samples to assess gold and silver values over a broad area to both confirm anomalies previously identified by past operators and to give the Company its own data base of surface sampling results. The new sampling along with integration of historic rock chip assays, trenching assays and soil auger assays should help define the full potential of the project. This work should better define the project’s footprint and will provide valuable guidance in planning future drill programs once fully permitted.

The Company has in its possession, a large amount of historic assay information that was obtained from several of the past operators, which includes rock chip samples, 43 trenches and 1,081 auger soil samples. These samples, along with results from our current sampling and “top of bedrock” assay samples from the drill holes, will provide a significant gold anomaly map to be used for future drilling.

Cross-section studies of the historic drill holes have identified areas within the historically identified gold system that were missed by the historic drilling. Confirmation drilling of these areas could add mineralized tonnage to the overall gold inventory. Some of the outcrop sampling is focusing on these untested areas.

Additionally, rock outcrops are not abundant on the property, which is mostly covered by soil. The outcrops that have been sampled are all strongly altered. Provenance believes these exposures may represent extensions of the mineral system and sampling these outcrops should verify that interpretation.

The Company expects assay results from this program in the coming weeks and completion of the full assay compilation will be released to the public as it becomes available.

Rauno Perttu, Provenance Chairman said “I look forward to drilling to confirm the historic work, and also to begin to expand the size and likely the grade of the system. With in-fill drilling and deeper drilling, I believe we can significantly increase the magnitude of the system”.

“Eldorado already holds a significant historical inventory of gold as calculated by a reputable engineering firm in 1990,” stated Steve Craig, project manager. “We believe we will be ready to drill with target confidence in 2023 following our extensive compilation and evaluation of all of the historic data that the Company has in its possession.”

Steven Craig, CPG, an independent consultant and qualified person as defined under National Instrument 43-101, has reviewed and approved the technical contents of this news release.

Provenance Gold Corp. is a precious metals exploration company with a focus on gold and silver mineralization within North America. The Company currently holds interests in three properties, two in Nevada, and one in eastern Oregon, USA. For further information please visit the Company's website at https://provenancegold.com or contact Rob Clark at rclark@provenancegold.com.

Neither the Canadian Securities Exchange, nor its regulation services provider, accepts responsibility for the adequacy or accuracy of this press release. This news release may contain certain “Forward-Looking Statements” within the meaning of the United States Private Securities Litigation Reform Act of 1995 and applicable Canadian securities laws. When or if used in this news release, the words “anticipate”, “believe”, “estimate”, “expect”, “target, “plan”, “forecast”, “may”, “schedule” and similar words or expressions identify forward-looking statements or information. Such statements represent the Company’s current views with respect to future events and are necessarily based upon a number of assumptions and estimates that, while considered reasonable by the Company, are inherently subject to significant business, economic, competitive, political and social risks, contingencies and uncertainties. Many factors, both known and unknown, could cause results, performance or achievements to be materially different from the results, performance or achievements that are or may be expressed or implied by such forward-looking statements. The Company does not intend, and does not assume any obligation, to update these forward-looking statements or information to reflect changes in assumptions or changes in circumstances or any other events affecting such statements and information other than as required by applicable laws, rules and regulations.