Please check your inbox to confirm your subscription.

June 14, 2021 - Provenance Gold Corp. (CSE: PAU) (FSE: 3PG) (OTCQB: PVGDF) (the “Company”) is pleased to report that all assays have been reported for its initial 23-hole RC drilling program at its Silverbow gold-silver project on the Blue Horse patented mining claim. The drill program was limited to the patented claim.  Drilling beyond this claim is planned to commence after permitting. Two target types were envisioned for this initial program: the first was the potential for high grade gold which was mined in the 1930s, and the second was a large bulk mineable breccia identified by drilling in 1993. The high-grade gold target remains promising while the bulk mineable mineralization was confirmed and is open ended.

The drill program confirmed potential bulk-tonnage mineralization on and north of the patented claim.  Review of the drilling supports Provenance’s interpretation that cross-faults have brought a potentially economic bulk-tonnage breccia zone to open-pit levels in the northern half of the patented claim and beyond.  This mineralization likely continues to the north of the claim into an area which had historic mining of a high-grade gold and silver vein system.

The Silver Bow project hosts a gold and silver system that extends across the five-kilometer length of the property, with numerous small historic mines and prospects across the property.   The drilling at Blue Horse is just one target identified in the larger Silverbow mining district. Other prime targets include the North Dome area where past drilling intercepted thick zones of breccia mineralization.  A key target on the domes is untested banded quartz veins which cross the dome.  A second key target is the Breccia Ridge on the north face of the dome. Anomalous to multigram gold samples were assayed across the extent of the breccia zone. Provenance intends to continue developing these and other targets in the district with the intent of drilling them as BLM drilling permits are developed and approved.

Rauno Perttu, Provenance Gold’s CEO stated “This first program on the Blue Horse patented claim returned significant results and confirmed a mineralized breccia zone that appears to continue to the north for a considerable distance.  This first target is only the start in this extensive mineral system which we are planning to permit and drill other targets in the near future.

We are looking forward to permitting and drilling the Dome targets three kilometers to the west of this program which host the best currently known targets on the property. One exceptional target is the extensive bulk-tonnage mineralization in a large breccia zone that extends down the north face of the dome and under gravel cover to the northwest. Another intriguing area of interest includes the potential bonanza grade targets in the boiling zones of the sheeted veins that cross the dome.  These types of targets have historically been the source of major discoveries in Nevada.” 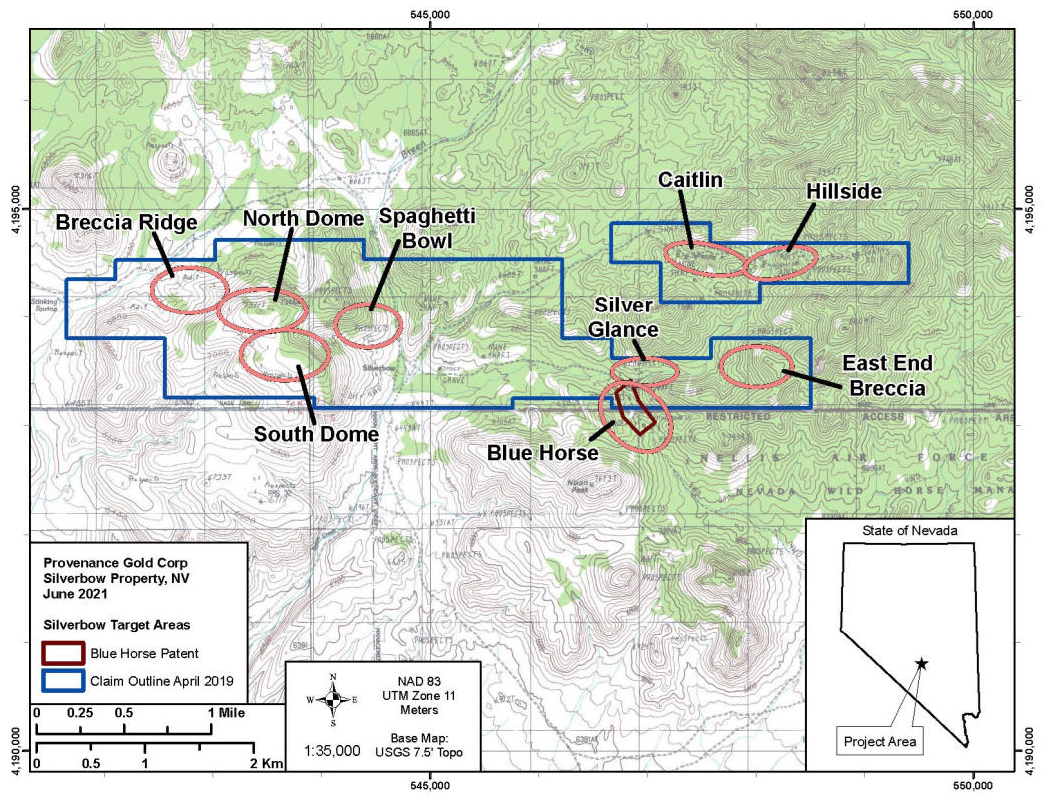 The reverse-circulation drilling program utilized by Provenance completed a quality assurance / quality control program (QA/QC) with control samples, standards, blanks and duplicates inserted approximately every 100 feet. The RC drill sampling was in five-foot sample intervals.  Drill samples were taken to Paragon Geochemical in Sparks, Nevada for fire assaying for gold and silver. The rejects and pulps remain with Paragon in Sparks, Nevada.   A QA/QC program was implemented as part of the sampling procedures for the exploration program. Standard samples were randomly inserted into the sample stream prior to being sent to the laboratory.

Rauno Perttu, P. Geo., a Qualified Person (as defined by National Instrument 43-101), and the Chief Executive Officer of the Company, has reviewed and approved the technical contents of this News Release.

Provenance Gold Corp. is a precious metals exploration company with a focus on gold and silver resources within North America. The Company currently holds interests in three properties in Nevada, USA. For further information please visit the Company's website at https://provenancegold.com or contact rclark@provenancegold.com.

Neither the Canadian Securities Exchange, nor its regulation services provider, accepts responsibility for the adequacy or accuracy of this press release.

This news release may contain certain “Forward-Looking Statements” within the meaning of the United States Private Securities Litigation Reform Act of 1995 and applicable Canadian securities laws.   When or if used in this news release, the words “anticipate”, “believe”, “estimate”, “expect”, “target, “plan”, “forecast”, “may”, “schedule” and similar words or expressions identify forward-looking statements or information.  These forward-looking statements or information may relate to the intended development and exploration of the Mineral Hill silver property, and other factors or information.  Such statements represent the Company’s current views with respect to future events and are necessarily based upon a number of assumptions and estimates that, while considered reasonable by the Company, are inherently subject to significant business, economic, competitive, political and social risks, contingencies and uncertainties. Many factors, both known and unknown, could cause results, performance or achievements to be materially different from the results, performance or achievements that are or may be expressed or implied by such forward-looking statements. The Company does not intend, and does not assume any obligation, to update these forward-looking statements or information to reflect changes in assumptions or changes in circumstances or any other events affecting such statements and information other than as required by applicable laws, rules and regulations.