Subscribe to our mailing list to receive news releases and other materials related to Provenance Gold Corp. Your email will never be shared or sold and you can opt out at any time.

November 08, 2022 – Provenance Gold Corp. (CSE: PAU) (OTCQB: PVGDF) (the “Company” or “Provenance”) is pleased to announce that a NI 43-101 technical report has been filed on SEDAR for its Eldorado gold property in Malheur County, Oregon. The purpose of this report was to form a baseline for the property, which will be expanded further in 2023 following a confirmation drilling program planned by the Company. Eldorado has a historic drill hole database consisting of 242 drill holes that have outlined a large shallow open-ended gold system. This historical database is currently not sufficient as the basis for developing a current mineral resource, but work is underway to verify and bring current the historical data.

In 1990 the first mineral inventory was calculated by Pincock, Alan and Holt (PAH) a reputable engineering firm that was used industry wide for this type of work. PAH modeled 158 of the historic drill holes which identified approximately 52,896,000 tons that graded 0.578 g/t gold (0.0169 oz/t gold) at a cut-off of 0.274 grams per ton (0.008 oz/t) in the completely open-ended gold system. The Company is aware of a second historical resource estimate that was calculated by ICAN Minerals and a further projected resource estimate by ICAN from work completed between 1989 and 1997 where the tonnage and grade were substantially higher. The Company is not treating any of these estimates as current mineral resources and a qualified person has not done sufficient work to classify the estimates as current mineral resources. The estimates were prepared prior to the enactment of National Instrument 43-101 and should not be relied upon for investment decisions. The purpose of presenting this information is to show that the Eldorado property has potential to hold a large mineral inventory. Provenance plans to update these historical estimates into a current resource model. Near term work includes confirmation drilling by twinning a number of the historic holes, certifying and comparing assays between the old and new holes, validating all historic holes in the field with a GPS and confirming historic metallurgical test results. When the Company is comfortable with these upgrades in compliance, then a new stand-alone current resource can be calculated. Other than these, the Company is not aware of any more recent estimates prepared for the property.

Within the Eldorado mineralized area there are many higher-grade zones.   For example, as quoted from the NI 43-101 report, ICAN Minerals’ hole R-96-C-1 intersected 1.51 g/t gold (0.0441 oz/t gold) over 196.9 meters (646 feet).  The estimate predates and does not comply with current CIM Definition Standards but illustrates that the gold system is large and extends to depth, not just in area.

Examples of High Gold Intercepts in Some Drill Holes 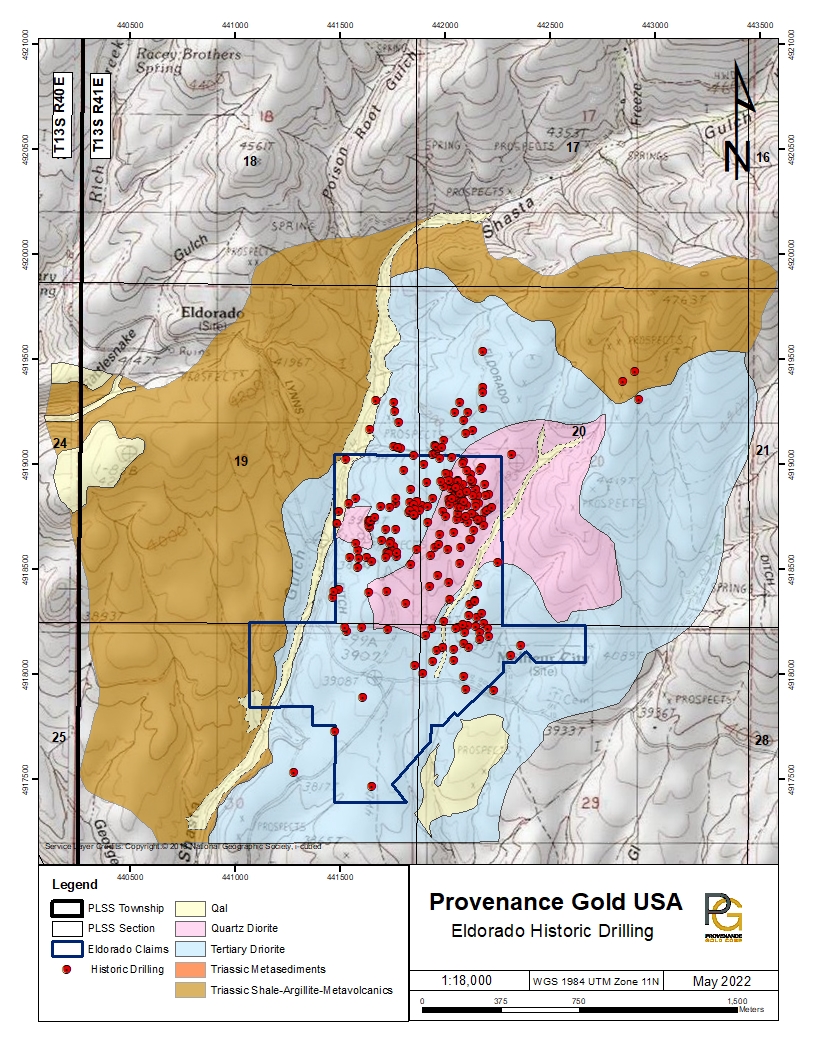 As stated within this new technical report:

“The Eldorado magmatic/hydrothermal system is interpreted as a classic porphyry gold system. Gold is found in veinlets, stockworks, fractures, and hydrothermal breccias. Mineralization is controlled by both strong fracture development and pyrite veining coincident with gold mineralization.   Pyrite veining, or its oxidized equivalent, is common throughout all of the drill holes.”

The historic metallurgical work suggests the gold is largely recoverable by standard methods. Dawson Metallurgical Laboratories and Mountain States R&D International conducted metallurgical tests that were encouraging, and these tests will be duplicated using material obtained from the upcoming drill program.

“Dawson composited five unoxidized sulfide-bearing samples into a 13.15 kg test sample that assayed 1.233 g/t gold (0.036 oz/t gold).  Pyrite was found to be the most common sulfide.   Approximately 90% of the gold was recovered by two-stage gravity-flotation. Significant free gold was observed in both the gravity and flotation concentrates.”

“The Mountain States laboratory conducted a series of bottle-roll tests on composite sulfide samples from the Property.  Three composite test samples yielded recoveries on unground rock that yielded 71%, 76%, and 77% recoveries.  Grinding increased the recoveries to 92%, 86%, and 83%.”

Based on Historic Metallurgy, Gold in Both the Oxidized Rock (yellow) and Unoxidized Rock (grey) is Readily Recoverable by Conventional and Even Non-Chemical Methods 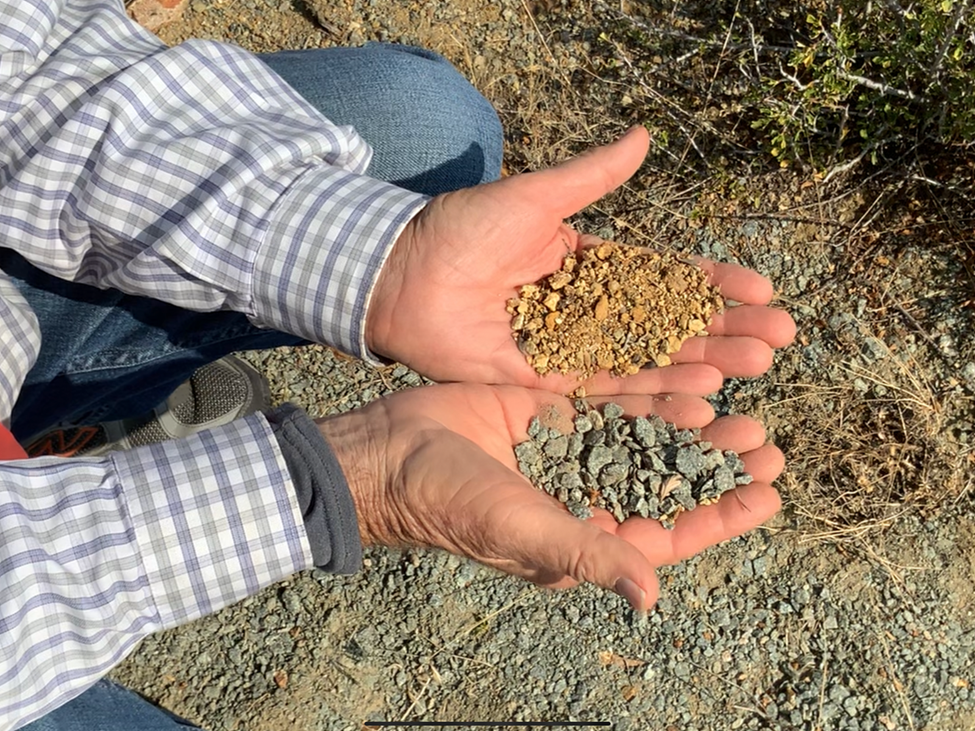 After review of the historic drilling and after surface inspection of the Eldorado Property, Provenance believes the gold system is open to expansion in all directions and will also expand with in-fill drilling.  The Company believes that the area of mineralization extends far beyond initially thought, and the surface mineralization expands even further.

Steve Craig, Project Manager states, “With future drilling programs, this project will grow with step-out and infill drilling.  Even in the central area, some major mineralized areas remain partially drilled. An important early additional plus is that the historic metallurgy by reputable laboratories indicated the gold is mostly recoverable even in the sulfide zone, by gravity and flotation in addition to standard chemical extraction.  This is because the gold appears to have come in after the pyrite, so it’s exposed and accessible to recovery.  This is unusual and very fortunate.”

The report concludes that the favorable geological setting of the Property, as well as mineralization intersected in historic drill programs indicate the presence of porphyry style gold mineralization at the Eldorado Property. Based on Mr. Gibson’s site inspection, as well as the authors’ review of historic and recent work completed at the Property, it is the opinion of the authors of this Report that the Eldorado Property is a property of merit that warrants future exploration.

As a result, the authors recommend a staged exploration program for the Property, with Phase 2 exploration being dependent on the results of Phase 1.

The Company will report on its next steps for advancing the Eldorado Property within the coming weeks. The Company has now submitted all the final permitting documents requested and required by DOGAMI, to finalize the review process. The Company is unaware of any further issues likely to arise and has been told that no further information will be required to complete the permit.  Site visits to the property have identified additional areas of obvious surface mineralization. Based on these studies, the Company wants to expand the currently planned drilling to include some of these areas inside and outside the historically drilled area. The Company plans to conduct its initial drilling program in the Spring to allow use of the new information to help guide exploration of these undrilled areas and to take advantage of more favorable weather.  More will be reported on these newly recognized mineralized areas in the very near future.

An NI 43-101 Technical Report (the “Report”) entitled "Technical Report on the Eldorado Property, Malheur County, Oregon " has been completed and filed on behalf of the Company. The report was completed by Michael Dufresne, M.Sc., P.Geol., P.Geo. of Apex Geosciences Ltd. and Jodie Gibson, M.Sc., P.Geo. with an effective date of October 20, 2022. The report was prepared to provide an independent evaluation of the exploration potential of the Eldorado Property.  The Report has been posted on the Company's website and is available on SEDAR.

Steven Craig, CPG, an independent consultant and qualified person as defined under National Instrument 43-101, has reviewed and approved the technical contents of this news release.

Provenance Gold Corp. is a precious metals exploration company with a focus on gold and silver mineralization within North America. The Company currently holds interests in three properties, two in Nevada, and one in eastern Oregon, USA. For further information please visit the Company's website at https://provenancegold.com or contact Rob Clark at rclark@provenancegold.com.

Neither the Canadian Securities Exchange, nor its regulation services provider, accepts responsibility for the adequacy or accuracy of this press release. This news release may contain certain “Forward-Looking Statements” within the meaning of the United States Private Securities Litigation Reform Act of 1995 and applicable Canadian securities laws.  When or if used in this news release, the words “anticipate”, “believe”, “estimate”, “expect”, “target, “plan”, “forecast”, “may”, “schedule” and similar words or expressions identify forward-looking statements or information. Such statements represent the Company’s current views with respect to future events and are necessarily based upon a number of assumptions and estimates that, while considered reasonable by the Company, are inherently subject to significant business, economic, competitive, political and social risks, contingencies and uncertainties. Many factors, both known and unknown, could cause results, performance or achievements to be materially different from the results, performance or achievements that are or may be expressed or implied by such forward-looking statements. The Company does not intend, and does not assume any obligation, to update these forward-looking statements or information to reflect changes in assumptions or changes in circumstances or any other events affecting such statements and information other than as required by applicable laws, rules and regulations.